Hamilton, Ontario – March 25th, 2013 – FELLFAB Limited was awarded the Ironman Award from the city of Hamilton Chamber of Commerce during their 2012 Outstanding Business Achievement Awards gala. During the event companies were presented awards in varying categories chosen by a committee of judges. The Ironman Award is presented to a Hamilton, Ontario based business that has been in operation for more than 15 years.

FELLFAB® represents over 65 years of entrepreneurship by a Hamilton, Ontario based multi-generational family business. With operations in Hamilton, Georgia and Texas, FELLFAB® through produces incredible textile technology.

Currently headquartered out of its Barton Street East facility, FELLFAB® has provided “Engineered Textile Solutions” to a variety of industries including Telecommunication, Medical, Industrial, Defence and Transportation. The company is a market leader in soft good defence products as it recently completed the rucksack, small pack and tactical vest component of the “Clothe the Soldier Program” for the Canadian Department of National Defence, as well as being a major supplier of seating products to most North American airlines.

The company continues its legacy of growth and innovation and recently launched its laminated seat cover solutions to the Aviation market. FELLFAB® also acquired Calgary based tactical products company, “Integral Tactical” and moved its operations to its Hamilton facility earlier this year.

The Hamilton Chamber of Commerce hosts the Outstanding Business Achievement Gala once per year. Companies are nominated for a variety of categories including, Ironman, Young Entrepreneur, Not for Profit, Communication Technology, Small/Large Business and Century award.

To learn about the Hamilton Chamber of Commerce:Please click here 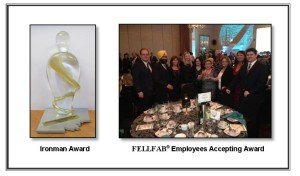